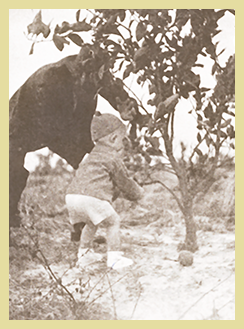 Back in 1940, J.L. Rogers, Sr. helped J.L. Rogers III–today’s chairman of the Packers of Indian River–pick some oranges from young trees planted in one of the Packer’s first groves. This area was on the banks of the Indian River and was called the “Big Grove” or the “River Grove”. J.L. Rogers Sr. bought this grove and a number of acres of vacant land from Eli Walker, one of the pioneers in Florida citrus during the early 1900s. Each winter, JL Rogers Sr. would travel from his grain and cattle farms in Kentucky to watch over his new Florida enterprise.

The sunshine and beauty of Vero Beach, Florida, was a doctor’s prescription for J. L. Rogers Sr. and in 1928, he came to Vero Beach to join his brother. At that time, there was a young and expanding citrus business centered in Vero Beach. The Rogers family had a love for the land and agricultural background in Kentucky, so it was natural for the Rogers Brothers to acquire their first grove in 1928. 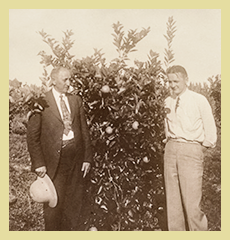 JL Rogers Sr. and JL Rogers Jr. pose in 1935 in one of the Packers’ early groves.

Sticking with his grandfather’s philosophy of good land, stewardship and quality, J. L. Rogers III, along with his son-in-law, Mike Garavaglia are today overseeing the business that his grandfather started. Indian River citrus, grown in our own Packer’s groves, can be found in fine hotels, restaurants and gourmet shops worldwide. The Packers of Indian River, Ltd. takes pride in providing premium citrus. Enjoy!